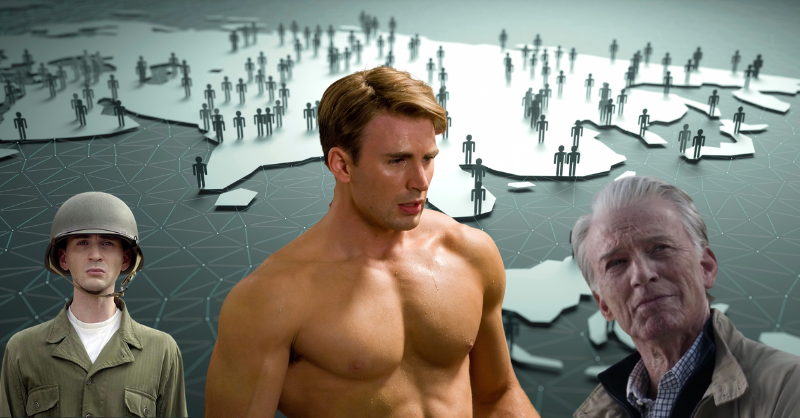 🔔 Captain America Explains Demographics (And Why They Matter For Markets)

Demographics are destiny. At least that's how they're described...
But demographic changes are like the tortoise of the economic race. Slow, steady & barely moving (which is why people don't care about them most of the time).

Eventually, they'll become all that matters, but in the meantime, demographics are a force that push and pull on an economy in combination with other factors rather than a destination to be reached.

First thing is to define roughly what we're looking at. Which is where Captain America is going to help us out.

At the start, he's young, skinny and relatively unskilled. This is how most economies start out...

Loads of young people, full of potential, but lots of work ahead if that potential is to be fulfilled.
That population pyramid looks like this 👇

Initially, this type of population relies heavily on investment from outside. A large pool of unskilled, cheap labour is appealing and foreign companies will look to invest and help exploit/extract the resources of the country.

Typically, primary sectors like agriculture and mining are dominant in this period, both for domestic industry and foreign investment.

Over time, the economy bulks up (like peak Captain America, but it takes longer. You can't pump an economy full of human miracle-gro).

As an economy develops, unskilled labour becomes more skilled and incomes increase. Living standards improve, and the economic focus moves more towards adding value (e.g. via manufacturing) rather than the simple extraction of materials/food.

Birth and death rates fall, so the demographic shape changes into something more like this 👇

Loads of prime age workers, generally more skilled/educated than their parents, all beefed up, ready to work, have families, and 'serve' their society.

The boomer generation is the perfect example of this cohort doing well. A growing labour force combined with technological advances to be extremely successful in their heyday 👇

Eventually, those workers age and start to dominate the population pyramid.

"Hey Cap, if you won't work any more, can you hurry up and spend all your savings so wealth can trickle down to the next generations?"

Economic growth becomes problematic. The biggest variable in the size of an economy is the number of people participating. Basically:

It's not the ONLY thing that matters of course. Productivity gains and a country's standing within the global economy can also have a bearing on outcomes, which we'll come back to in a second.

First, have a watch of this hypnotic global population growth visual from James Eagle 👇

Are demographics an unavoidable fate?

In the end, yes. But immigration is a mitigating factor too. In a simple world, if you don't have enough workers, you can import them. The same is true for skills shortages.

Immigration can improve the productivity of an economy, but one country's loss is another's gain.

Pre-Brexit, a friend observed that the UK was exporting their pensioners to the EU while importing skilled (or cheap) labour in return.

British pensioners were retiring to, and spending their savings/pension in Europe, but smaller EU nations weren't getting a long-term return on their 'investment' (education) because their skilled workers were participating in someone else's economic pie rather than growing the domestic one.

Who got the better deal in this 'exchange' program?

Wars and natural disasters can have massive impacts on the demographics of a country, but aside from shock events, it's a pretty stable, pre-set path with the usual variance (prodcutivity, innovation, immigration) around the trend.

Globalisation was supposed to fix this. In a more globalised world, economic skill mismatches can be evened out across borders. At least in theory.

One of the great mysteries now is China. At one end of the scale, the country has a high skilled, highly educated workforce struggling to find jobs at home to match their education. At the other, a growing elderly population...

And, largely due to the effects of the now defunct one-child policy, their overall population size is expected to start the shrinking process imminently 👇

China's population is expected to start to shrink in 2021-2025, the Global Times said, citing Yang Wenzhuang, head of population and family affairs at the National Health Commission.

The battle's on for everyone to do more with less via automation and productivity gains.

The simplest way to think of this is working hours. If fewer people work, but the remaining workers clock more hours, the negative impact is mitigated. Obviously this only works to a point, which is where automation and robotics (hopefully) comes in...

Let's use a controversial analogy to illustrate the dependency ratio.

Imagine a person eating a delicious meal.
Now imagine that their body is covered in ticks.

The person is the economy.
The food is what's sustaining the economy (productivity)
The ticks are the retirees.

Obviously we're not comparing the older generation to ticks in the literal sense.They've contributed to the economy for decades, paid their dues in taxes and social security etc. It's just a way to (graphically) visualise the economy as a co-dependent ecosystem.

Not enough food (productivity) kills the host (the economy)
Too many ticks can also kill the host...
But as long as everything stays in balance, it's sustainable.

It's not a perfect analogy, but it hints at why innovation and productivity gains are so important.

Less people working means that the dependency ratio increases. If 63% of the population is working, the other 37% are dependent, either by choice, lack of skills/opportunities or because they're too young/old to work.

It's a complex subject, and one that will be debated with increasing urgency in coming years. Demographics matter, but they're not the only thing that matters. Yet.

This index turned negative ahead of the last five US recessions

Is 'paying attention' an edge, and does value really matter?