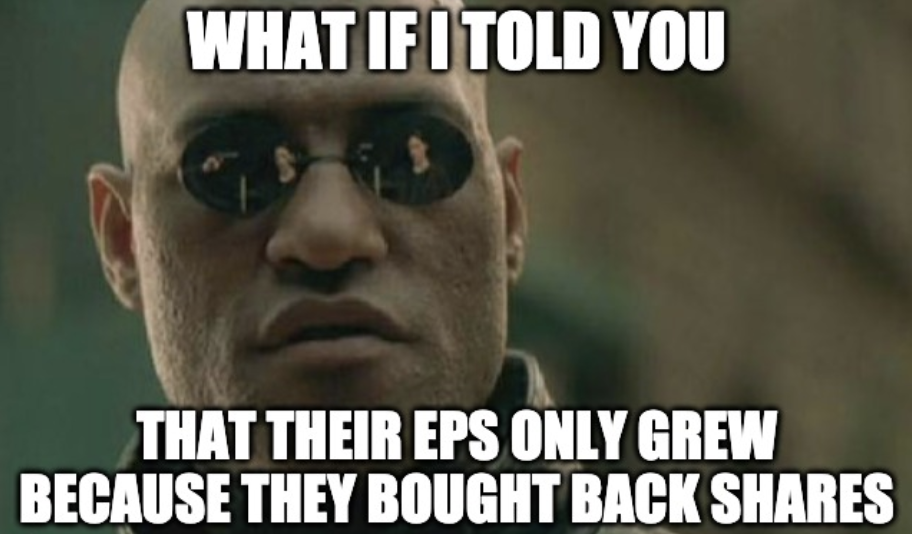 Share buybacks are at their lowest point in over a decade.

Many might take the potential increase as a massively bullish signal, and they're correct.

Share buybacks do only tend to increase earnings per share in the short term, since there are less shares available on the market...

In the new monetary policy regime of low rates and economies being pumped with liquidity via QE though, we can throw the perception of share buybacks only contributing to a higher EPS out of the window.

If investors believe that the company bought the shares back for less than the stock is intrinsically worth, then that's bullish.

And it's bullish because of a couple of factors.

If the perception is that the company is using low yielding cash to buy its shares back - bullish.

If it lowers the weighted average cost of capital - bullish.

But it's firm dependent.

If a zombie firm were to buyback shares, it might not be bullish,

If Apple does it (since it has massive cash hoards), then it'll decrease that WACC and will probably be bullish.

Here's an explainer on WACC.

For the Nasdaq, then, if buybacks increase, it'll likely lead to a broader upside move, especially if we are coming from a lower base.

Of course, where yields lie will be a major question - if they rise then we will probably see a slightly lesser impact, although I reckon the general direction of inflation and therefore yields is firmly to the downside, even if we have seen a bit of a reflation trade over the past couple of years, with the 5s30s shown below.

Check out what we have written today, if you haven't already.

The Importance of Being the Dollar

Why is the dollar so important in the global economy?

Is optimism overshooting reality? Plus a look ahead at tomorrow's calendar.