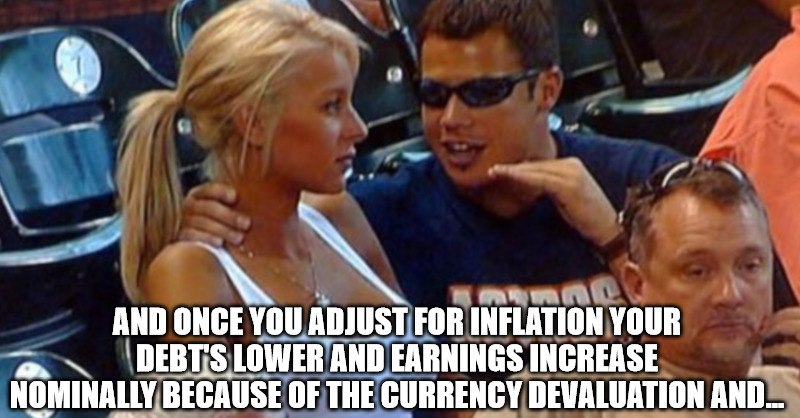 🔔 Bro, did you even adjust for inflation?

Inflation in the real world is a tricky thing to understand. Everyone saw the OMG 9.1% inflation print from the US yesterday, but it's hard to comprehend the real-world impact of a single number like that.

Inflation is the decline of purchasing power of a given currency over time. A quantitative estimate of the rate at which the decline in purchasing power occurs can be reflected in the increase of an average price level of a basket of selected goods and services in an economy over some period of time.

The rise in prices, which is often expressed as a percentage, means that a unit of currency effectively buys less than it did in prior periods.

While there's nothing wrong with that as a definition, what does it mean in the real-world?

Let's grab some hot takes and rip them apart as examples 👇

That presumes that you're experiencing inflation at exactly the average, (which is unlikely for obvious reasons), so it's a bit rough around the edges...

Anyway, it's not just your wages that are being devalued by inflation...

He's bang on with the tone deafness. Nobody thinks about this, nor have they really needed to for the past two decades. Yet it's clearly true.

Every dollar received as a loan/mortgage had a certain amount of purchasing power when it was lent. That same dollar returned to the lender has a lot less purchasing power now. Which, in isolation, is a win for the loanee.

And it's also why you see charts like this, usually alongside people crying about 'sound money' 👇

Now, I'm pretty sure those figures aren't exactly right and you've just witnessed two chart crimes in a row but it illustrates the point well.

That's not quite the case right now according to the Atlanta Fed wage tracker, which suggests that, on aggregate, wages aren't keeping up with inflation.  👇

But the Bank of America data contradicts the Atlanta Fed, and it's certainly not true for everyone 👇

So maybe wages are increasing above the rate of inflation. And for the young'uns they definitely are.

And if you dig a little deeper, something else is going on too. 👇

In normie language, that means that workers at the bottom of the organisation (and pay-scale) are faring better relative to their managers and supervisors.

So, the lowest paid workers are getting pay increases closer to the rate of inflation, AND the younger generation are doing equally well (or better) and actually beating inflation.

What do these two groups have in common?

Basically, the younger generations are less likely to save and more likely to spend (consume). 👇

And it's the same for lower-paid workers who usually earn just about enough to keep their heads above water. Every cent gets spent, nothing gets saved.

So when we see this 👇

Yes, it means the public is still spending, but that data needs to be adjusted for inflation to get the proper context. This chart is from March, (so not the most up to date) but you get the idea 👇

The total value of the goods sold increases as the value of the currency decreases. Doesn't mean more goods were sold.

Then there's the tax angle.

Unless your portfolio's down on the year...

The same applies to income tax too.

Bringing it all together, inflation's a tough challenge. But it's not pure misery for everyone all of the time.

Debts are devalued, wages increase, and prices go up. Right now, that's happening faster than usual. But high debt loads and stagnant wages at the lower end of the pay-scale have been a problem for the past decade.

A brand new economic path... or is it just transitory?

He keeps a low profile, but he's stuck to his guns and been on the money for over two decades