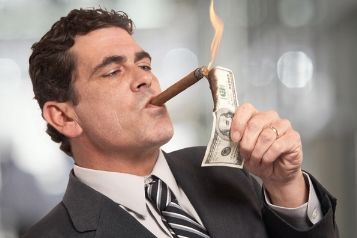 Shout out to Macrodesiac partner Syscoin 👇

I've been thinking about this concept of "smart money".

Smart money is capital placed in the market by institutional investors, market mavens, central banks, funds, and other financial professionals.

Smart money also refers to the force that influences and moves financial markets, often led by the actions of central banks.

Smart money is invested on a much larger scale than retail investments.

First up, even though it's called smart, the label has nothing to do with intelligence. David described this beautifully in an old note I dug out:

Smart money is simply those investors who have more efficient means of coming to an investment decision, whether it’s based on time, money or more effective ways of entering the market.

It’s not some shady cabal of blokes sitting in a dark ex-monastery, plotting which way to send the markets next.

It’s simply those with access to information or the means to break information down and analyse it in a faster way.

Even that efficiency advantage is no guarantee of success...

If you're so smart, why can't you beat the benchmark?

Hedge funds gained 8.7% on average from January to November 2021, according to data provider HFR.
That marks their third consecutive year of gains, but trails by some distance the US S&P 500 index’s 24% total return over that period.

That's not just because of the pandemic either. From 2020:

Every year, S&P Dow Jones Indices does a study on active versus passive management. Last year, they found that after 10 years, 85% of large-cap funds underperformed the S&P 500, and after 15 years, nearly 92% are trailing the index

That said, there's no doubt that plenty who qualify as smart money will keep coining it in. Like these legends:

In fact, Switzerland's central bank is doing SO well, the Swiss Trade Union Federation (SGB) wants some of those profits for their pension system.
Some academics/economists want to turn the SNB into a sovereign wealth fund...

Printing CHF and using it to buy big US tech stocks is definitely a competitive advantage. It's not dumb, but it's a stretch to call it smart.

Is there anything else that differentiates smart money from the crowd?

Smart money is predictive, not reactive

This argument was the basis of Don Hayes' Smart Money Index.

The main idea is that the majority of traders (emotional, news-driven) overreact at the beginning of the trading day because of the overnight news and economic data.

There is also much buying on market orders and short covering at the open. Therefore, the basic strategy is to bet against the morning price trend and bet with the evening price trend.

End of day (evening) buying is supposed to be more pragmatic, as this is when the big institutions get their business done, making decisions based on the broader economic & investing landscape rather than the latest shiny news headline.

Or at least, it was back then. Things change.

Does all of the smart money really wait for an arbitrary time window to execute their trades?

It’s simply those with access to information or the means to break information down and analyse it in a faster way.

If you pause and think about it, the access to information and fast analysis edge has been eroded enormously over the past decade.

The Internet is the great equaliser. Twitter is basically a hive mind of analysts at everyone's fingertips (presuming you follow the right people).

Yes, the smart money will still have an edge in execution and other ways, but it's not what it was.

So, ANYONE can be smart money?

Yes. But that isn't the point. More importantly, you can avoid being dumb money.

To reinforce the point, smart & dumb money isn't differentiated solely by wealth.
It's a way of thinking about, and approaching markets.

It's what we're constantly doing with the premium crew. Focus on being less reactive as a default. Look at the bigger picture.

And don't idolise those who already have wealth. It could genuinely be luck that got them there.

Anyone can be dumb money. Even the wealthy... 👇

I have spent the past few weeks in the depressing company of high-net-worth investors.  The experience has been sobering, alarming, comedic, maddening, frustrating and ultimately cathartic.
Here’s my summary conclusions:

Outfits like CNBC are doing untold damage because they feed a hype cycle that will ultimately prove to be disastrous for retail investors; retail only cares about performance it can brag about at cocktail parties;

Because of above, you are almost rooting for these morons to have their lunch handed to them; and WHEN their lunch gets handed to them, I for one will be deliriously happy because. . . they absolutely deserve everything coming their way.

Just this week, a HNW investor who brags about his investment acumen, said this to me: “I check Cathie Wood’s market commentary every day and she thinks. . .” Cathie Wood is your portfolio construction resource? I wanted to shoot myself in the face.

Another investor showed me his portfolio: TSLA options, GME, AMC, NIO.  “These options are great.  The returns are too good to pass up.”  Because they only go one way. . . He told me he got involved in AMC because “everyone he knew” was talking about it. Way to go SEC.

I asked him to identify the risks in AMC’s business. “What do you mean?” was the response. With a straight face. I went through comps with him, a basic balance sheet and cash flow projection. Got the dead trout look.

Not a one of these HNW nitwits knew what a gamma squeeze was. Some had never even heard of it.  Not a one knew who Bill Hwang was, or what the average annualized return of stocks has been since 1999.
Zero perspective.

Portfolio construction, taking gains, selling early, disciplined exits were all concepts utterly alien to these people. I looked at one guy’s portfolio and asked, “why do you own so many consumer names?” The answer was; “why does that matter?  They’re just stocks.”

I don’t mean to demean the thoughtful individual investor, because some do exist, but I have been utterly shocked at how disproportionately skewed my sample set has been. Because the idiots outnumber the thoughtful by 10:1.

The driving force for all of them was greed. Absolutely no regard for anything else except for how much money they have made. Selloffs are nothing but dip-buying opportunities created by “the weak-knees.”

I have no idea if the story is true, exaggerated or embellished. But does it seem plausible given the kind of markets we've seen these past couple of years?

🔔 Cheap For A Reason

Bond yields starting to look attractive (or are they?) & The Veteran's consumer discretionary stocks to watch this earnings season

Narrative: "There's going to be a new monetary system, backed by commodities" Facts: "There isn't, we already tried it, and it sucked" A few things could change though...