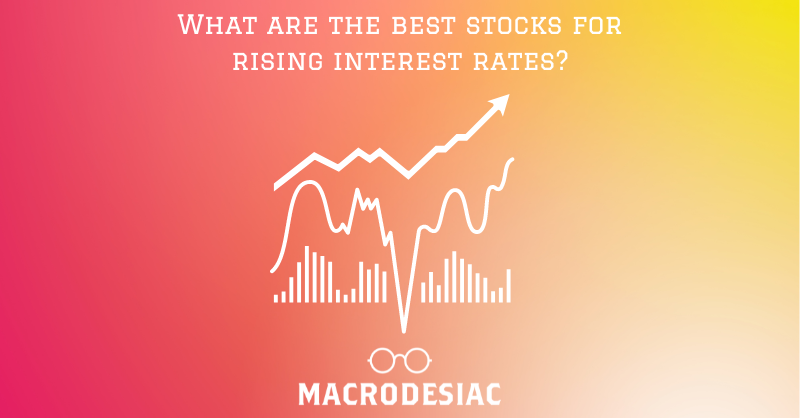 The SP500 has been decimated over the last couple of months, with some of the stock market darlings like Apple, Meta and Amazon down a load off their highs.

This is largely all due to the rising interest rate environment, which we've covered extensively below...

Put simply, when interest rates are rising, stocks become relatively more expensive to hold as central banks try to get a grip on inflation.

Alongside the above article, you'll want to read this one to focus even more on that relationship.

But there always have to be winners and losers, so what are the best stocks for when interest rates are rising?

Well let's sort of rephrase that question a little and talk more about strategy.

So, rather than focus necessarily on trying to make a tonne of money, since we know that the easy money is made when interest rates are going down...

We should focus our efforts more to some longer term single stock winners.

With every rate hike cycle, there are some differences we have to be aware of though...

For instance, even if we compare the 2008 Financial Crisis to now, we didn't have quantitative easing already having worked its magic leading to elevated asset prices (and lower interest rates).

So we get into a situation whereby the central bank, which certainly looks at the stock market as a barometer of financial conditions, has created a market that is inextricably linked to interest rates...

So any hint of raising interest rates changes the relative pricing of stocks quickly.

Which makes this article actually strange...

Because what I am really advocating for here is simply taking a more holistic view of the market and increasing our investing horizons.

The best stocks for rising interest rates now that we know markets are likely to sell off as rates do rise are the tried and tested ones through history.

These stocks don't imply that they will simply go up along with rates, rather that by having them in your portfolio vs say, growth stocks, you have a better chance at winning in the long term.

My all time favourite therefore has to be McDonald's (log chart shown below).

“We are not basically in the food business,” former McDonald’s CFO Harry J. Sonneborn

There has never been a rising interest rate environment that has derailed the core business.

McDonald's leases its land to franchisees.

For the stores that it leases to the franchisees, it makes about 82% revenue vs. 16% from its owned stores.

So then if you consider that rents are largely going to remain fixed through downturns, the only real danger to the McDonald's model is if people cease eating the food...

And I don't think that really happens...

And this one is pretty simple.

Why try and reinvent the wheel when you can basically give money to two of the greatest investors of all time, Warren Buffet (a massive McDonald's fan) and Charlie Munger?

Who cares if rates are rising or decreasing?

The central thesis to that is those two have known what they're doing for about 60 years, and I'd trust them more than I'd trust myself!

Then of course, the easiest and most sane option is to simply buy an ETF of the SP500.

It makes the most sense.

If you are looking at the long term, you are not trying to time the market - you're trying to simply smooth out your curve and remain invested as much as possible.

Unless you are doing this as a day job, trying to piece together how and when rising interest rates will affect your portfolio gets you much more into trading (gambling) and hanging onto every single piece of news that comes out.

Markets don't really change. Yet some businesses die while others adapt and thrive. What's the secret?

Is this magazine cover a contrarian indicator for crypto?

Magazine covers are an excellent contrarian indicator in financial markets. Time for a crypto reversal.