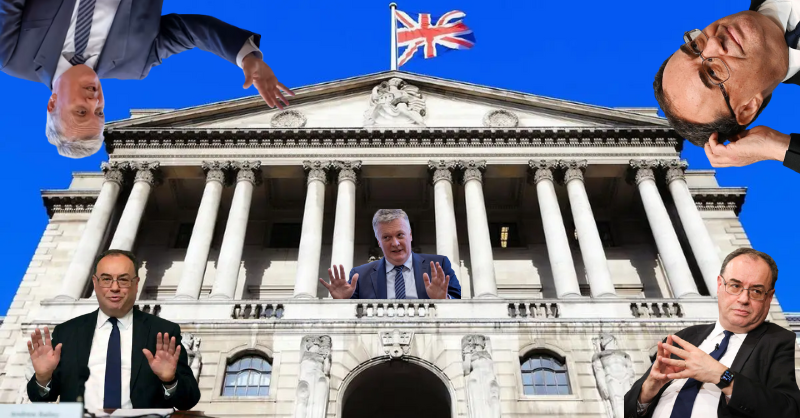 After a period of BOOMING house price increases left many unable to even grasp the bottom rung of the housing ladder, the Bank of England has decided to make it easier to obtain a mortgage. Just as the housing market slows, and interest rates rise. Top timing as always.

Reading the headline is bound to elicit this response.

Here we go again, another sub-prime property bubble in the making <rolls eyes>

If there IS a new bubble, it won't be because of this. When the policy was originally introduced in 2014, the committee was trying to protect home-owners from excess indebtedness.

Despite these regulations being introduced in June 2014, UK house prices still kept on rising...

Almost like there's something else driving the whole thing... 👇

Interest rates matter most. As a general rule of thumb, if rates go up, price growth will slow, and prices will even fall if rates go up enough (likely to see on this soon). If rates go down or remain low, prices go up.

Simple enough as a starting point.

So, what about these affordability tests then?

The Financial Policy Committee (‘the FPC’ or ‘the Committee’) introduced two Recommendations in 2014 to guard against a loosening in mortgage underwriting standards that could lead to a material increase in aggregate household debt and the number of highly indebted households: the ‘LTI flow limit’ which limits the number of mortgages that can be extended at loan to income (LTI) ratios at or greater than 4.5; and the ‘affordability test’ which specifies a stress interest rate for lenders when assessing prospective borrowers’ ability to repay a mortgage.

Jeez, liven it up a bit! That can be condensed to...

First one's self-explanatory. Banks can only lend so much at high Loan To Income.

The affordability test is a weird one though. It's based on a 'reversion rate' which is essentially the rate that your mortgage defaults to (usually the "standard variable rate") after the initial fixed rate period.

In reality this rarely happens.

Most people take out fixed rate mortgages and renegotiate them as the end of the term nears. According to UK Finance, 74% of home-owner mortgages are on a fixed rate contract, with 96% of new borrowers choosing this option since 2019.

So, the affordability test is pretty redundant anyway. The FPC noted that:

In particular, the stress rate encapsulated in the test has remained broadly static reflecting stickiness in reversion rates despite the fall in average quoted mortgage rates

Where's the incentive to change something that rarely applies. ?

Capping the number of high loan to income mortgages is the far more potent tool (and they're keping it) while the FCA’s MCOB responsible lending rules fill in the blanks. And those rules already contain plenty of clauses relating to affordability including this one:

a mortgage lender must take account of the impact of likely future interest rate increases on affordability, as set out in MCOB 11.6.18 R.

TL;DR It's hard to see how this would drive a new boom in sub-prime lending. To me, the far bigger risk right now is the landlord 'businesses' that levered up and relied on rolling debts easily in a low-rate world.

If prices fall and the economy slows, banks might not be so kind when they build the lower equity values and higher risks of tenant non-payment into their risk models.

We need to talk about Cathie's price targets...

Cathie didn't feature here because I don't really think of her as a storyteller... 👇

But the main point of the piece was to look beneath the shiny veneer, and see what the real motivations were...

For Cathie's ARK funds, there's no doubt that attention grabbing price targets help get their name into the collective consciousness...

And there's a great Twitter thread covering how it all works, starting with this quote from ARKK’s Head of Research Brett Winton:

"If you're wrong, that's fine, as long as you are uniquely wrong..."

"If you're uniquely wrong, everybody thought you were crazy anyway, & so it's not priced in. If your forecasts were on avg worse--but unique--that is better than having forecasts that are actually closer to the actual truth but the same as everybody else."

Marketing in a nutshell. Attention first. Accuracy second.
It's a great read 👇

ARK is available to trade with Macrodesiac Partner capital.com 👇

Has the recession already started? 15% of CEO's say yes... Keep a close eye on the zeitgeist and longer-term bonds