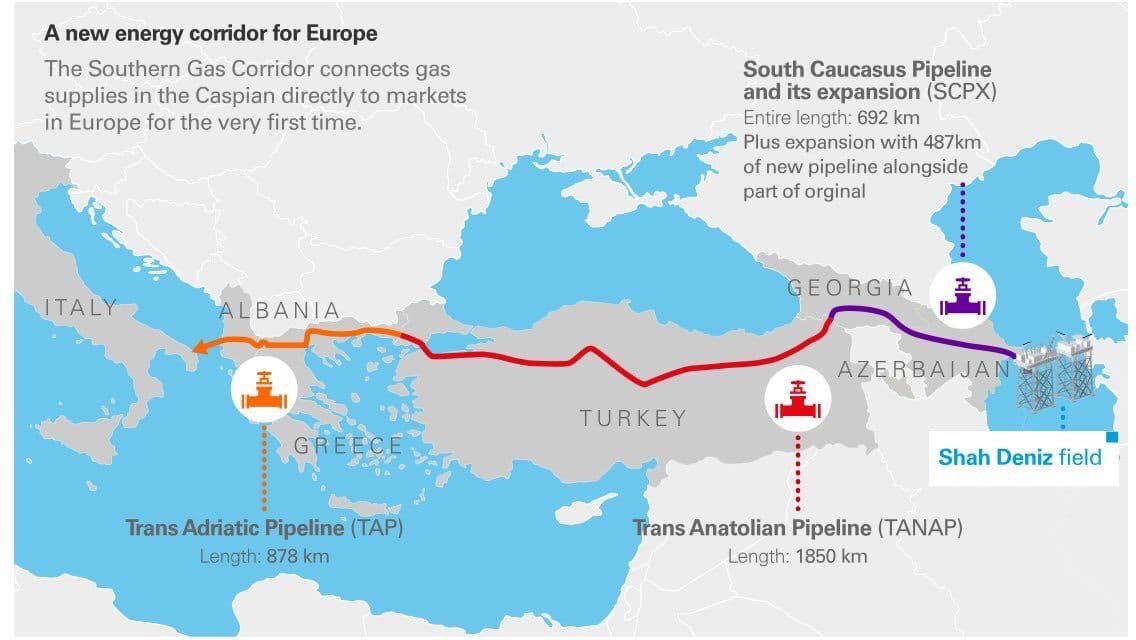 Armenia-Azerbaijan Clashes - Why do they matter?

Headlines about conflicts in far-away lands are often met with a collective shrug of the shoulders by the broader market, especially when the conflict has been running for as long as this one.

'But this time it's different'

The favourite words of every market analyst.

(It probably isn't, but that doesn't mean you should ignore it).

So, this conflict is centred in Nagorno-Karabakh

The conflict has been going on for three decades.

Time to ask the key question...

The Baku-Tbilisi-Ceyhan pipeline (red) transports oil from the Caspian Sea into Turkey, via Georgia.

The Baku–Tbilisi–Erzurum Pipeline (blue) is a natural gas pipeline that runs parallel, but finishes in Erzurum.

The first aim of the pipeline is to supply Turkey and Georgia.

As a transit country, Georgia has rights to take 5% of the annual gas flow through the pipeline in lieu of a tariff and can purchase a further 0.5 billion cubic metres (18 billion cubic feet) of gas a year at a discounted price.

In the longer term, it will supply Europe with Caspian natural gas through the planned Southern Gas Corridor pipelines, such as the Trans Adriatic Pipeline and Trans-Anatolian gas pipeline.

Reuters noted in their earlier report;

Any move to all-out conflict could drag in major regional powers Russia and Turkey.

Moscow has a defence alliance with Armenia, while Ankara backs its ethnic Turkic kin in Azerbaijan.

Well, The EU are trying to reduce their energy dependence on Russia.

This 'Southern corridor' was an EU initiative started back in 2008.

Significant loans were granted via the European Investment Bank, & the European Bank for Reconstruction and Development, together with other regional development partners.

The whole history is here

Completion of the Nordstream 2 project was thrown into some doubt after the poisoning of Navalny.

Some may cry foul, and accuse Russia of 'fuelling' the conflict for strategic benefit.

Maybe that's the case, but I would say again...

A drawn out conflict could certainly lead to a closure of the pipelines, either for safety reasons, or due to strategic attacks.

However, this story is worth monitoring for different reasons, as a prolonged escalation could substantially influence the geopolitical landscape.

"The US believes the Nord Stream 2 pipeline creates a risk for Europe by becoming dependent on gas that's coming out of Russia and also threatens Ukraine, something I know many German people care deeply about,".

If the EU becomes even more reliant on Russia for energy, they will once again find themselves in the middle of another conflict, instead of securing their future energy supply.

To finish, it is worth noting that Nord Stream 2 doesn't have too many fans in Eastern Europe either;

Remember, if you want to get a better understanding of what's really moving the markets, join us on Macrodesiac Premium;

Into the last week of September (month and quarter end) and risk sentiment is positive this morning. U.S. Futures

When Soros left the Bank of England with a SoreArse... a lesson

OK there's more than one lesson here, but there's one that I want to focus on. Not much has gone