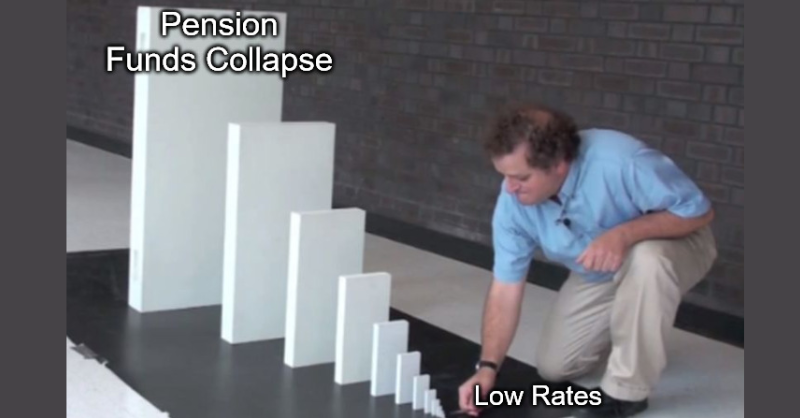 As soon as you solve one problem, another problem begins.

The good news. British pensions are all magically fixed now. The BoE isn't going to sell gilts (QT) until Q4 of never 2022, and the problems were solved just as quickly as they appeared.

They might not be solved at all, but we're not here to talk about Britain. Nope, it's the turn of the Dutch.

Leaving aside the ominous 'for now', let's consider what the Dutch central bank is asking of their pension funds. 👇

"Thanks for the heads up lads, we hadn't even THOUGHT about that, we were just sat around having a shmoke and a pancake laughing how that could never happen to us. What would we do without you to give us a nudge eh?"

Clearly, it's not that simple. Pension funds are a combination of tortoises and dinosaurs. Slow to move, slow to evolve, and just generally slow to adapt.

What are the pension funds supposed to do? Insta-sell a load of assets (that are probably interwoven and/or collateralised elsewhere in the portfolio?) and then sit in cash?

Unwind trades that have taken years to put on in a matter of days?

Who's going to take the other side of those trades?

Especially with a looming ECB meeting next week, in which the central bank is expected to raise the deposit rate by another 75bps to 1.5%.

Dutch Central Bank Governor Klaas Knot was keen to highlight (calm down, nothing to see here) the ways in which Dutch pension funds differ from the UK:

“Dutch pension funds have diversified their investments more, because they run no exchange rate risk within the eurozone, and the eurozone government bond market is much deeper [than the UK’s],”

The €1.4tn of assets managed by Dutch pension funds is almost as big as the UK sector, but the market for UK government debt, at £2.1tn, is much smaller than the total outstanding amount of eurozone sovereign debt at €9.7tn.

Knot flagged that the liquidity requirements in the Netherlands are tougher than in the UK, which does not have equivalent requirements for pension funds.

Those shorter term rates will instantly rise by 0.75% on the 27th October. And the ECB is about to hike by 75bps for the second time (1.5% of hikes in three months vs the 1% 'threshold') and is expected to take rates higher again in coming months.

The criteria for those stress tests is a bit behind the times...

As for the argument that the higher amount of outstanding eurozone sovereign debt means liquidity concerns won't be a problem is... sort of flawed too.

Japan has a huge amount of outstanding debt, and yet...

Not a perfect comparison, but you get the idea. Size of a market isn't an indicator of instantly available liquidity.

Especially when you consider the poor auction performance elsewhere in Europe recently... 👇

Especially if the cash rate's expected to be 3% (or higher) within a few months.

Dutch pension funds have used similar LDI strategies that caught out the UK funds. However, the ECB says this is concentrated more in smaller funds and on a lesser scale.

Nonetheless, a multitude of risks loom in the eurozone. If confidence/liquidity further decreases (or if the ECB can somehow make the market believe they'll wind down their balance sheet [QT] while simultaneously controlling the spreads between core & peripheral bonds), then things could get funky...

Keep a close eye on these 👇

Those assumptions in the ECB stress tests look fine in theory, but whether they stand up to the reality of a fast-changing market environment in the coming months is another matter entirely.

Matthies Verstegen at Pensioenfederatie, the Dutch pension fund association, said its members were “far less likely to set off the feedback cycle” that caused turmoil in the UK. But he said they were “considering what happened in the UK and recalibrating their liquidity management where needed”.

Verstegen added that there was “an urgent need to improve access to intraday liquidity”, which had been squeezed by “post-financial crisis margin rules” (a familiar theme) and a lack of capacity in repo markets, in which bonds can be converted into cash.

Britain's had their turn in the spotlight. Within the next week or two there'll be a new leader and a new fiscal plan. Who's next?