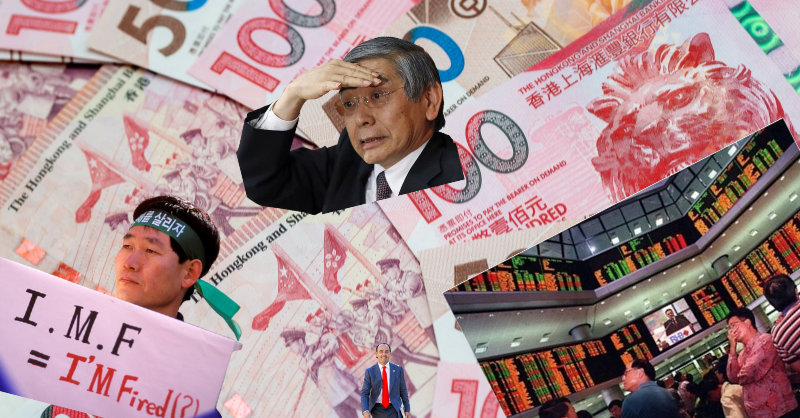 You probably don't remember the Asian Financial Crisis. It happened in 1997.

If you were anything like me around then, your time was spent listening to Kiss 100's latest banging R&B or UK garage tunes, football and school.

But it was a pretty big deal, and we might be sleepwalking into the sequel...

All of the usual 'crisis' disclaimers apply. When everyone's worried about a crisis, it usually doesn't become a crisis. But I haven't seen many mentions of this and it's the quiet ones you have to watch...

And in a crisis, everyone needs dollars. We wrote about this for premium members earlier in the week 👇

Referencing this recent paper on dollar funding stresses in China. Here's some snippets to set the scene 👇

We have documented that China’s potential needs for US dollar funding during periods of stress are large. China’s use of relatively short-term dollar funding has been increasing and seem likely to continue to grow.

During future periods of stress in dollar funding markets, China might have difficulty in quickly sourcing a sufficient quantity of dollar financing to control liquidity stresses on its financial institutions and corporate sector, which could lead to global spillovers.

Basically, in times of stress, China is likely to need a lot of dollars, quickly, and might not be able to get them...

And we have this juicy combination to consider too 👇

In 2020, it was estimated that between 2019 through 2024 a total of $488 billions of US dollar bonds issued by Chinese firms were to be extinguished or rolled over with new funding (CGFS, 2020).
Among the most stressed of the associated borrowers are property developers, who have been hit by regulatory leverage constraints.

By now, everyone knows there are issues with Chinese developers. We published this back in March 2021 when Evergrande was still pretending to be solvent 👇

In the piece, we highlighted the risks of a stronger dollar making it harder for those huge debts to be repaid or rolled...

And the dollar HAS been strong of late. Intriguingly though, one of these charts is not like the others...

While the dollar has repriced against the yen and the Korean won (top 2 panels), the yuan has remained relatively strong. It was already clear that the yuan was too strong back in April...

China's currency subsequently weakened from the 6.30s to around 6.70.

There could be more to come however...

The bottom right panel shows China's yuan vs Japan's yen (CNHJPY), and we're right back at China's yuan devaluation level of 2015. As China's exchange rate is heavily managed, could it be that a similar repricing has merely been delayed, but will soon be required to 'keep pace' with competing Asian economies?

“If the yen keeps weakening, China will see this as unfair competitive advantage so the parallels to the Asian Financial Crisis are perfectly obvious,” said O’Neill, who was chief currency economist at Goldman Sachs at the time of the crisis, and is now senior adviser to Chatham House.

“China would not want this devaluing of currencies to threaten their economy.”

All pretty logical. But there's a flipside too... A weaker currency buys fewer dollars. (duh).

Why does this matter?

China's been lending out dollars to emerging markets (Belt & Road initiative), and they'll need to roll those debts soon too.

In sum, non-financial Chinese corporates have a large proportion of the outstanding dollar bonds issued internationally from emerging-market countries. The dollar amounts of these bonds are large.
Moreover, a large proportion of them are relatively short-term (requiring rollover by 2024) and have been issued by entities that have no natural source of dollar income.

Lots of dollars will be required by 2024 between the BRI and property developers...

Elsewhere, the Fed's fast and furious rate hike cycle is already having an effect in Hong Kong.

Will the HKD peg break?

Probably not. The HKMA has about US$465 billion to play with. But that doesn't mean liquidity won't get (a lot) tighter.

“Hibor is getting more sensitive to the US short term,” he said, adding that the three-month rate may climb past 3% by year-end.

Which means more interventions to defend the peg by withdrawing HKD liquidity from the system to bring local interest rates (Hibor) higher and in line with US rates.

Back to the original Asian Financial Crisis and this timeline 👇

It all started in Thailand. Pegged to the dollar, they ran out of FX reserves and were forced to freely float the currency, triggering a domino effect.

And there are risks of currency devaluation in Southeast Asia again. But this time round more due to rate differentials. Take a look at the difference between hikes & expected hikes for the Fed vs Thailand, Indonesia & Vietnam...

And if a currency crisis arrives in any of these nations, what usually happens?

A run on the exchange rate and the banks as everyone realises what's going on. Banks are then at risk of insolvency because their foreign liabilities (often in dollars) increase relative to their now devalued domestic assets.

Keep an eye on the smaller Asian economies for signs of stress. China though, is by far the largest concern. Back to the earlier paper 👇

In any case, there is a risk of disruption to dollar funding markets arising from a potentially large and sudden need for China’s banks and corporates to roll over dollar-denominated debts.
Absent a means of rapidly and efficiently dealing with these large dollar funding stresses, the adverse impacts on China’s financial stability and economic growth could be substantial, and could spill over to the rest of the world.

Summing up, these smaller Asian economies could be caught in a vice between the two largest economic players.

On one side, China's slowing economy, combined with huge debts that will need to be rolled between now and the end of 2024, and on the other, a Federal Reserve rapidly hiking rates and increasing the 'cost' of those dollars.

A huge selection of FX markets are available to trade with Macrodesiac Partner capital.com 👇

Zombies on the verge of collapse doesn't tell the whole story. The Veteran's mining for hidden gems in the small-cap world

🔔 The Market Doesn’t Care About Your Morals

If you want to understand markets, you have to put morals to one side. The world doesn't run on platitudes...