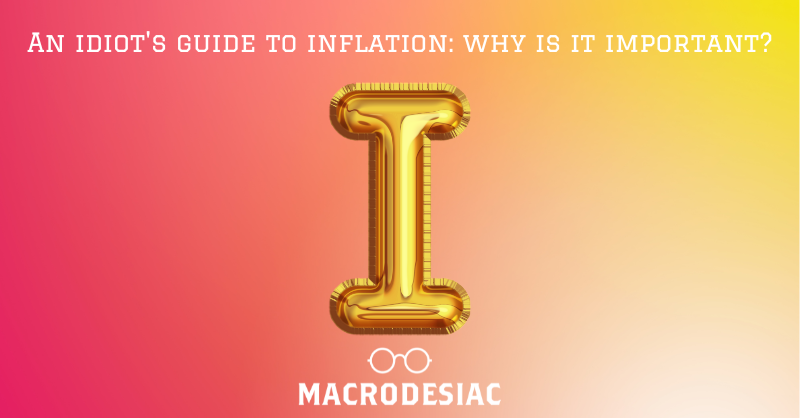 🔔 An idiot's guide to inflation: why is it important?

You've probably heard of inflation, but why is it REALLY important?

And why do people misunderstand inflation as well?

It seems like such a simple concept... but it can also make you feel like an idiot.

Once you get that inflation = prices going up, what more is there to know?

And why should anyone care about inflation anyway?

Well, inflation's a tricky thing. It can impact us all, and not just in the cost of the things we buy, but other subtle, less visible ways too.

I'm going to attempt to make inflation interesting, and make the case for caring about it.

Broadly speaking, inflation is a measure of the average cost of living.

More specifically, inflation is how we track the changes in the average cost of living.

The Consumer Price Index (CPI) is the most widely-used measure & tracks the value of a basket of goods that 'most people' would consume.

There are plenty of flaws with the index and how it is calculated, so it's best to think of this the same way as we think of the BMI to measure obesity: Broadly accurate, yet imperfect.

CPI is then split into headline & core figures...

Example: War seems imminent in the Middle East.
Oil supply could be affected so oil prices rise in anticipation.
Two months later, a truce is brokered, oil prices normalise.
Headline CPI would include this fluctuation and show higher inflation. Core CPI would not.

Now we know a bit more about how inflation is defined.

Let's bring in the other 'flations and then bring everything together at the end...

Some people still got confused in the replies, so let's make it even clearer..

Inflation is the Rate Of Change of prices.

To understand inflation there are two questions to ask:

This is where we bring the 'flations in.

Examples of how inflation, disinflation and deflation work

Sounds wrong, doesn't it? It's a terrible name.

I mean... If it costs more it's still inflation... right?

We should rename it Slowerflation...

Not the prettiest word, but more descriptive of what's actually happening.

Prices are still increasing, but at a slower rate than before.

But that would be wrong...

It's all about the Rate Of Change across time.

Let's go back to those two questions.

We've established that the price is going up.

That's question 1 answered (are prices going up or down?)

Onto question 2 (how fast are prices changing?)...

If we only know that the price has increased by 75% in two months, that second question is impossible to answer...

However, if we know the Month over Month (MoM) increase, we can measure that all-important rate of change...

So prices ARE changing, but not as quickly as they were before.

The following month it costs $980

Prices are going down. That's deflation.

That's the nuts and bolts of inflation.

Back in the real world, have you ever seen anyone walk around the supermarket checking whether things cost 2% more than last year?

It's just not something people in developed nations think about.

So, why else does inflation really matter?

Debt is the foundation of modern society 👇👇

(Just don't ask who owes what to who, we'll be here a while)

When central banks preach about 'financial stability', this is what they mean.

The U.S. Federal Reserve explain why that stability matters (and why they aim for 2% annual inflation over the long run) 👇

Inflation of 2 percent over the longer run, as measured by the annual change in the price index for personal consumption expenditures, is most consistent with the Federal Reserve’s mandate for maximum employment and price stability.

When households and businesses can reasonably expect inflation to remain low and stable, they are able to make sound decisions regarding saving, borrowing, and investment, which contributes to a well-functioning economy.

Over the long-run is a key phrase and has been perfectly illustrated by these past two years.

Average Core CPI inflation is 2% over the two year period.

As noted earlier, CPI is the most universal metric.

If we use the Fed's preferred measure (Core PCE), the figure is actually 1.6%.

If inflation persists above the 2% target, the Federal reserve will increase interest rates to dampen inflationary pressures.

Put another way, they re-establish the cost of debt.

The plan would be to do so in an orderly, sequenced manner so that financial stability can be maintained.

This is where the recent 'transitory' debate has centred.

Transitory inflation would be defined as a period of above target inflation, followed by a period of disinflation (slowerflation).

Back to the laptop example.

❗ The laptop does not need to return to $1,000 for this inflation to be transitory.

If it did, that would be deflation.

'Transitory' references a return to the inflation target (2%).

The fear that inflation is NOT transitory is based on the monetary policy response.

The Federal Reserve could be forced to hike rates aggressively to 'get ahead' of inflation.

Why would this be undesirable?

Rapid increases in the cost of debt impact can influence how people make decisions (and how they spend).

For example, a household with a variable rate mortgage will suddenly see their monthly payments increase.

Take out a loan for a holiday or a new car, it suddenly costs a lot more.

Remember, it's that rate of change that matters most.

The same goes for businesses and lending.

Lines of credit with suppliers may be reduced or removed altogether.

"Maybe we should hold off on that hiring drive until things settle down..."

These behaviours can be contagious, so economic activity is more likely to slow if the cost of debt changes too quickly.

There you have it.

The idiot's guide to inflation.

You down with NFP? Yeah you know me

It's finally (NFP) Friday!! Chinese indices aren't hanging about... Selling off across the board.

Will the RBA remain ultra-dovish amid new lockdowns? Can the Fed minutes tell us anything new? OPEC+ deal for now, more negotiations to come