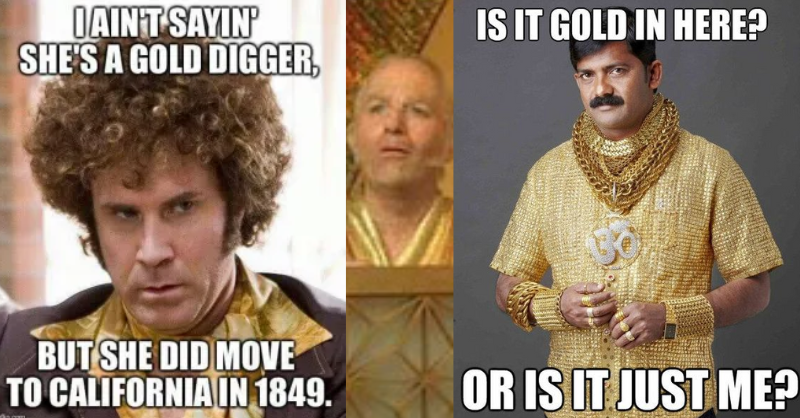 🔔 Almost Time For Gold To Shine

Usually, gold is way down the Macrodesiac priority list. But we're starting to wonder if it could make sense in the coming months...

First up, let's explain why we usually ignore it 👇

Gold is a doomer asset.

That was written back when negative-yielding bonds were surprisingly popular.

The principle remains the same even when bonds are yielding significantly less than inflation. In other words 👇

Gold's mainly in demand when everything's going badly. The willingness to hold the stock of gold depends on the rate of return available on alternative assets

Which is why, a lot of the time, gold just hasn't been that attractive.

Especially in a low interest rate world where companies are (were?) able to buy back stock and increase shareholder returns that way too.
Low rates are a pretty reliable tailwind for the stock market.

What if there's no road back to that low rate world?

If you look at the global economy now, a rapid return to a world of ultra low interest rates seems unlikely.

With inflation running hot and energy prices stabilising at high levels (for now), central bankers have nowhere to go but up, at least until there's some serious pain in labour markets.

That's not to say they won't cut the hiking cycle short, or even start cutting rates as soon as they have an excuse to.

It seems foolish to depend on this as a strategy now though.

All of their messaging and forecasts see them getting inflation under control within the next couple of years or so. And maybe they will.

Anything can happen in two years. Recent history is a perfect (albeit extreme) example of that.

When the return to low rates then?

Well, let's look at the US as an example. Imagine that the unemployment rate jumps to 4% (it's currently at 3.6%), with core inflation staying sticky around 4% too.

Way above that 2% target.
And a longer term view of the unemployment rate 👇

Double 4's is still a very hard environment for the Fed to cut rates. It might not even be enough to see the Fed pause the hiking cycle.

A 4% unemployment rate is historically VERY low and the risk of the much-feared wage-price spiral increases the longer that inflation remains high while employment is strong.

Consider company incentives too. As long as they're able to keep raising prices, they're more likely to pay up to keep capable staff on board.

All of the above risks embedding inflation expectations at higher levels than the central bank wants to see. Without a meaningful drop in employment, it's hard to make the case for the central bank pivot.

What's gold got to do with it?

We'll get there. More scene-setting first.

The economy is slowing, inflation's biting, but people are unhappily muddling through, drawing down savings, working overtime, and/or two jobs to make ends meet.

Companies are hanging in there too, still hiking prices but not like they could before. They're reluctant to cut staff because of difficulty replacing them if it's the wrong move ("and this inflation stuff will all blow over soon")

Right now, the US economy is still adding jobs, but the hiring pace has slowed back towards more 'normal' levels.

If the economy is in a recession, employers have not seemed to notice. Despite clamors that the economy may already be in a recession due to the possibility of two consecutive negative quarters of GDP growth (a view we do not share), the labor market continues to plow forward, supporting aggregate income and limiting the havoc wrought on spending by high inflation. ~Wells Fargo: 8th July 2022

At some point, something will have to give. Companies can't keep hiring into a slowing economy. Unless the economy miraculously turns for reasons nobody's foreseen, profits will probably be the first release valve before employment really starts to tumble.

The housing slowdown is well underway now. Redfin reported that 60,000 deals fell through in June alone 👇

The momentum in new orders is starting to ease, as seen in recent PMI data. 👇

ISM manufacturing new orders fell below 50 (into contraction) in June too.

So, profits next. Eventually, employment will contract too. Then what?

For the past couple of decades, the Fed's been there as a reliable ally. Economy's slowing, cut rates, restart the cycle.

Can the Fed be relied upon if inflation isn't back at target?

And if it isn't the stable world of old, investors might look at things a little differently when asking

"Where do I put my money to work?"

It's an over-simplification, but investors have been spoilt by relatively reliable returns from bonds and stocks during the Great Moderation.

The Great Moderation, a period of steady growth and inflation is over. Instead, we are braving a new world of heightened macro volatility - and higher risk premia for both bonds and equities.

This regime has echoes of the early 1980's. We ultimately expect central banks to live with inflation but only after stalling growth.

The result? Persistent inflation amid sharp and short swings in economic activity.

In that kind of volatile regime, is there a temptation to hold something tangible? Something that's stood the test of time as a wealth preservation vehicle? Admittedly, it's an imperfect vehicle, but over time gold does tend to appreciate, and it usually does OK in a recession too...

Right now, there's a strong dollar headwind to contend with. That could last a while longer yet. But at some point, the Fed will take their foot off the gas pedal, and that USD tailwind will fade.

As company profits take the hit, it's likely that investors will hide in bonds and drive yields down, but with an uncertain economic picture, credit markets will likely stay tight regardless.

Presuming that equity returns are no longer the 'sure thing' they once were due to companies battling to maintain profitability and little sign of a Fed rescue package on the horizon (because inflation is still too high), these could be the perfect conditions for gold to shine.

Sentiment's in the doldrums too. These are taken from a recent Macro Ops note. First up, a thread on gold positioning/sentiment  👇

As for pricing, your guess is as good as any. A few obvious levels stand out. 👇

"This is such a terrible investing environment, I can't make money ANYWHERE"

The mid-term elections could be a catalyst too. Add a divided, combative congress to the mix, and there's potentially no policy support from the fiscal or the monetary side for a year or two... Scary prospect.

So, there you have it. The bull case for gold.

The 'easy' trade from the lows is done. Now we're 'on the verge of a bull market' Is a stimulus promise enough to take Chinese stocks higher from here?

He keeps a low profile, but he's stuck to his guns and been on the money for over two decades