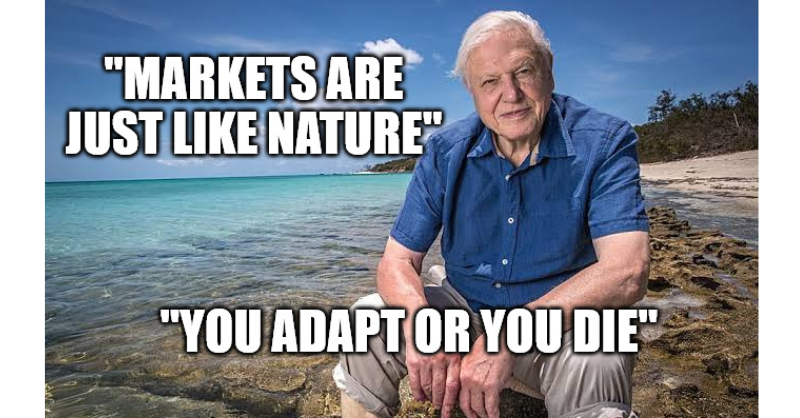 Last week I wrote about how everything changes over time on the surface, but in reality the fabric, the structure and the behaviour of the markets remain the same, because of one ever-present constant - human beings and their emotions 👇

The fact that the markets never really change doesn't mean we can rest on our laurels. Financial markets are the closest thing that most of us will experience to life on the African Savannah.

And here I am not talking about a safari (although with the weather in the UK as it is that does sound appealing ). Instead, I mean Financial Darwinism.

This doesn't necessarily mean kill or be killed, the survival of the fittest... Nothing quite as dramatic as that. It means adapt or die. Actually that's just as dramatic... Anyway 👇

If the markets don't change then why do we need to adapt?

The framework of the markets doesn't change. Neither do the types of participants. They may have different names from time to time, but that doesn't mean that markets are static or not subject to outside influences.

After all, despite our best efforts, the underlying economies that markets reflect are cyclical in nature and produce peaks and troughs as we can see below.

The cyclicality of the economy and the factors that influence its performance (such as inflation, interest rates, unemployment, industrial activity and spending, by both corporates and households) all directly affect stock markets and the individual equities within them.

This manifests in cyclicality and seasonality within the markets. As traders or investors, we need to recognise when these forces are at work.

So, cyclicality... Take for example this chart of the S&P consumer discretionary sector. The companies in this sector make their living by selling us life’s little and not-so-little luxuries. 👇

Things we don't need to survive -  although this Hermes dog bed is really cute.

Anyway, we can see that the consumer discretionary sector enjoyed a very nice run higher post-Covid, up until December last year, since when it’s broadly headed lower.

Whilst the more pedestrian, and dare I say prosaic, consumer staples sector (see below), where companies make a living selling us what we need to survive on a daily basis, enjoyed a shallower, but longer lasting post-Covid rally.

The constituent companies within these sectors are well aware of the cyclicality and seasonality within their industries.

If they are well-managed and well organised they don't just blindly accept the status quo. Instead, they try to adapt their business model to take account of those factors and if conditions change then they adapt their plan accordingly.

And if they do that well enough and often enough, they can become what is known as a category killer.

The chart below highlights one such stock. LVMH has far outperformed the S&P 500 consumer discretionary sector, in terms of its percentage gain over the last 3-years. 👇

To be clear, LVMH isn't a member of the US sector. However, it is, without a doubt, the category killer in the space. Having achieved, mastered and maintained the most difficult of all brand building and marketing tricks:
Commoditised Luxury

Now that might sound like an oxymoron. It probably is, yet LVMH has built a global empire by offering luxury brands to the masses, persuading us that we need their status symbols and that their ubiquity doesn't lessen their desirability.

The 56% outperformance over the S&P 500 Consumer Discretionary sector (+71.3% vs +15%) over these last 3-years shows us just how well they execute their business model.

Indeed the stock has been recently been credited with making Paris the largest stock market in Europe, by capitalisation, dislodging London from the top spot.

There's all sorts of caveats to that statement, but it's a fun comparison nevertheless.

Defeat snatched from the jaws of victory

In August last year (2021), I wrote an article entitled Hitting The Target.
I explained why I thought Target (TGT) was on the way to becoming a category killer in the consumer staples space.

At that time the argument was very plausible. 👇

And yet as the economy, supply chain and consumer spending patterns changed, Target didn't. Or at least, didn't change quickly enough.

The share price peaked in December last year and slumped in May when the company admitted that it was stuck with a lot of inventory that wasn't shifting at normal prices and was tying up precious working capital.

The solution was to clear decks with a sale of the overstocked items at substantial discounts. However even this fire sale wasn't enough to stem the rot.
A lacklustre Q2 earnings report in August was compounded yesterday by Q3 numbers and a quite frankly disastrous Q4 outlook.

“Citi analyst Paul Lejuez says that while he believed Target would need to lower guidance from the record Q4 it was projecting, he did not anticipate it would cut margin expectations in half. The company saw a slowdown in trends in the second half of October that led to a significant miss in Q3, Lejuez tells investors in a research note.”

“The softness has continued into November, leading management to take a more cautious approach on both Q4 sales and margins, adds the analyst.
He believes the Q3 performance will call into question Target's margin recovery story for next year.”

There is a category killer in the world of consumer staples. The blue below is Walmart.

Their stock has risen by +2.57% over the last year compared to losses at Target in black and Tesco in green.

Walmart posted a Q3 earnings beat and announced a $20 billion buyback this week. Here's what the market thought about that 👇

Target is 80.89% owned by institutional shareholders, the largest holders are set out below.

I doubt that any of them can be happy with how the company or the stock is performing right now. Something will need to change. I wonder if that will mean starting with changes to the management team.

On the face of it, they have failed to adapt, and must therefore (metaphorically!) die.

Jeremy Hunt says if we take more of your money and dump it into that swirling dark fiscal abyss, it'll go through the magic wormhole and reappear in the wallets of other people who need it more than you