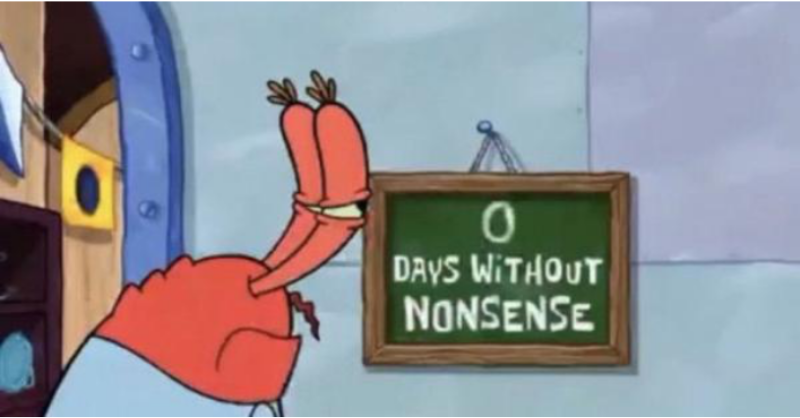 Literally drowning in nonsense everywhere. So today I'm going to point at things and rant about how nonsensical they are. You'll either agree or disagree, we'll all benefit from the experience and move on with our lives.

Everyone knows there are lessons to be drawn from history. Things that were relevant in the past offer lessons for the present.

People were actually reading them as if they were relevant and not three weeks old!

"ooooh they were really hawkish"

Seriously, who's reading these minutes and selling bonds because it reads hawkish? We're talking about the same meeting where the Fed shocked the world with a 75bps hike.

Except it wasn't a shock because they [allegedly] leaked it to Nick Timiraos at the WSJ to make sure everyone knew in advance.

Since the meeting commodity prices are way down too 👇

And the market focus has clearly shifted towards recession. PMI's are showing a slowdown in orders and employment momentum.
Take a look at this from the US service PMI's 👇

The passing on of higher input costs to customers resulted in a further marked increase in selling prices in the US service sector.

That said, the rate of inflation slowed sharply for the second month running and was the softest since last September.

Some panellists reported trying to price competitively to attempt to stimulate new business in a weakening demand environment.

On top of that, interest rate futures are now pricing a peak interest rate of 3.3%
(vs the 4% that was being priced pre-meeting) AND they're pricing in 50bps of rate cuts by the end of 2023. 👇

Meeting minutes are often stale by the time they're released. This time round it was even more insane than usual to pay them any attention.
In the context of the current market, those minutes are ancient history.

ECB minutes were released today too. Nobody cared. It's the next meeting that's important. And just as interest rates are about to increase, French finance minister Bruno Le Maire says that debt rules don't matter any more. 👇

Bank of France governor Villeroy strongly disagrees. They should probably talk to each other... 👇

"Clearly the era of negative or zero interest rates is over; we need to spurn the seductive but dangerous illusion that French public debt comes without costs and limits,"

At least work on the fragmentation tool's going well. They've got the most important work done already! 👇 /s

No rush guys. Still a couple of weeks yet.

Who wants to bet they'll even get it done before their August holidays, let alone the July policy meeting...?

Policy makers have tried to reassure investors that a measure will be ready. On June 29 at the ECB’s annual retreat in Sintra, Portugal, Lagarde stated that a new tool “will be considered by the Governing Council” on July 21, saying at the time that “it’s a work in progress.”

Meanwhile Vice President Luis de Guindos said earlier this week that
“I hope for sure that we will reach an agreement.”

The most reluctant hikers in the G7 might have to go big with 50bps at the next meeting. The latest BoE survey of UK businesses showed that cost and wage pressures aren't going anywhere. 👇

That wage growth is at least in part due to the difficulty in recruiting. This chart tells the story 👇

Harsh as it sounds, the central bank will want to see that "Not Recruiting" column tick higher as an indicator of slowing economic momentum. Instead, it actually ticked down in June...

Get another 50bps hike in before the winter of discontent? Whoever replaces Boris Johnson is in for a rollercoaster ride. Bank of England Chief Economist Huw Pill said yesterday "We're not expecting really to see any growth in the economy over the next year or so,". No growth, but gotta hike anyway. Happy days.

God Save The Queen & Rule Britannia ✊

The PPT's real. But it's not a crack team of traders waiting for the call from JP to start smashing the buy button...

Is the market out of sync? What does it say about risk appetite when pension funds are freeing up cash to become Venture Capitalists?