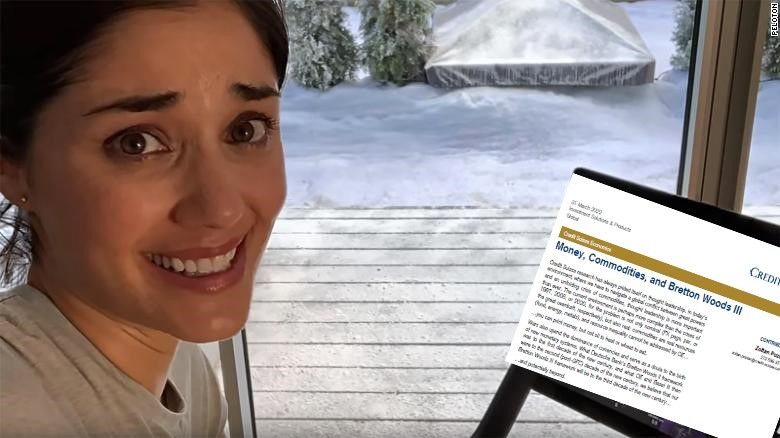 Is this the end for Bretton Woods III: The new monetary system that Zoltan, everyone's favourite financial superhero, says is inevitable?

Technically, it would need to start before it could end. We're not going to let those minor details stop us though...

Shout out to Macrodesiac partner Syscoin 👇

The Zoltan has been making financial waves for a few weeks now. From his view that the Fed could target asset prices to reduce inequality and get people back to work, to his call for a new monetary order... 👇

...it's fair to say he's been pushing the boundaries of imagination, history, credibility and pretty much everything else.

Personally, I love it.

I don't agree with a lot of what he says (especially the over-emphasis on China's role in the monetary system), but I DO love the creativity and this balls on the line approach to challenge the narrative of "how the world works" 👇

Now, he might be right or he might be wrong. The beauty (and utility) of the note is how he's laid out his flow of thoughts.

It's all there. Just like the old school days when teachers would make you "show your working".
In that regard, he's a model student.

But that doesn't mean it's free from bias. Zoltan's view is bound to be shaped by his experience in financial architecture. Is it fair to assume he probably has a money-centric view of the world which could influence his conclusions?

Most importantly, everyone benefits and learns from the healthy debate that it generates.

Michael is also the author of the best explainer of the Eurodollar system (the shadow USD finance system not EURUSD!) I've ever read.

Now, I wouldn't do this work any justice if I tried to select & clip pieces out of it.

Basically, if you're interested in how finance and global trade intertwine & the arrangements and incentives that underpin the system, it's well-worth your time to read this and Zoltan's original notes.

If you just want the conclusion so you can sound smart to your friends...  👇

Alongside dramatic world events ‘Bretton Woods 3’ has an appealing market narrative. Indeed, we agree with a lot of its core arguments, depressing as they are.

However, it is not new. It is old. And in not looking back enough, it fails to look forward sufficiently.

To argue that we are going to see shifts to Cold War and global Great Power struggles, and a world in which commodities, logistics, and the military all play key roles alongside finance and currency, and with a geopolitical need to run large trade surpluses, is to argue for an ancient economic philosophy: mercantilism.

Modern economists may have forgotten the true meaning of that term, but it reigned as long as commodity currencies did – and it implies a highly realpolitik global environment. To be fair, BW3 implies the same without naming it directly.

Yet is that backdrop negative for USD and positive for BW3? No.

A mercantilist realpolitik environment is one in which the requisite set of resources and diverse sources of power, after some policy shifts(!), still rest more with the US and its allies and their military, soft power, and financial power, than with a cluster of commodity-producing states (and one commodity importer).

That is especially true if that cluster want to create a parallel economic and financial structure from disparate net exporter polities, who do not trade horizontally together to any great degree, and while also still exporting to the rival West!

As such, BW3 will not work, and USD will retain its leading global role – albeit perhaps with more sticks and fewer carrots.

If we were to see fewer USD circulating internationally via trade, servicing Eurodollar debt will just get harder – and that will keep a structural bid behind USD.

By contrast, borrowing in CNY will still be unattractive for almost every economy given China’s persistent trade surpluses and capital controls.

As such, on BW3 all we will see at best, is a marginal increase in the ‘offsetting’ use of CNY ahead – and more rapid global decoupling, likely to its ultimate detriment.

That's the gist. But if you read the whole thing, this will literally be your brain afterwards, I promise* 👇

Smart money isn't what you think it is. And "dumb money" isn't just retail with tiny accounts...

Something's Got To Give In USDJPY Trust The Bald Guy Twitter Takeover Technicalities Netflix Too Bearish Into Earnings?