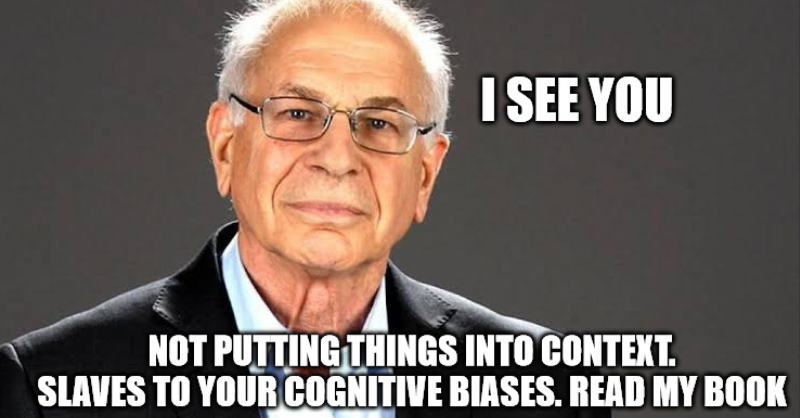 The Veteran's thoughts on the importance of putting information into context, especially at times when news flows shift into hyperdrive. 👇

“A modern city or urban area filled with large buildings and regarded especially as a harshly competitive, unwelcoming, or dangerous place.”

In the discord this morning several Macrodesiac members were chatting about driving and how long it took to get out of the city, into the countryside and back to nature.

Those that hail from the UK bemoaned the fact that it took ages to get into the great outdoors because of how overdeveloped the country is. In particular the length of time it takes to reach Cornwall because of inadequate transport and communications links.

A US member said he was in the woods after only a 45-minute drive.

That set me thinking. What we have here is a classic case of availability bias.

After all, the truth is that the UK is not a concrete jungle. Far from it. Yes of course we have our fair share of metropolitan centres and densely populated built-up areas often surrounded by a ring of suburbs...

However, the reality is that the vast majority of the UK is hardly developed or built on at all.

Not to mention the 1.85% of the UK classified as 'urban greenery' (parks etc).

What's more, according to the Houses of Commons Library:

“The Green Belt has clustered around 15 urban cores, the largest of which are London, Merseyside and Greater Manchester, and South and West Yorkshire.”

So the reality is that England and the rest of the UK are still the green and pleasant lands of Jerusalem fame. It's just most of the population is clustered into and around a series of cities and large towns led by London and the Southeast of the country.

This map, which shows the population density in the UK (the number of people pr square kilometre) highlights the issue.

Availability bias comes about because we make decisions relying on the information that's immediately at hand and the observations we make locally rather than looking at the bigger picture.

People tend to assess the relative importance of issues by the ease with which they are retrieved from memory—and this is largely determined by the extent of coverage in the media. ~Daniel Kahneman

Thinking locally is fine if you are trying to assess whether you are going to get wet walking the dog. Or from where, and when, you should order your takeaway to get the best out of the kitchen in the quickest time.

But relying on the information that's immediately available to you when making important decisions about money and finance is rarely a good idea.

We could make the case that the whole media frenzy around the UK economy in recent weeks has been a glorified case of availability bias, with a side helping of its old friend confirmation bias.

Both the UK mainstream media and many market commentators wrote the UK economy off without offering any context as to where we sat on the global stage or how our nearest neighbours in Europe were faring.

They prefer instead to opine on matters (in the case of the populist media) they know nothing about without seeking out any contra opinions or ideas.

The key word in all of this is context because that’s what thinking globally offers you.

“Global” does not have to mean the world stage but it does mean thinking beyond your local area and immediate experiences.

This was the original meaning of 'thinking outside the box' before it was ruined by corporatists.

It’s often said that a little knowledge is a dangerous thing and that is never more true than in trading.

My advice is to read widely, talk to people with opposing views, and try to discover if those views are based on facts and conviction or are held because of availability bias and preference for sound bytes over the full story.

Test your view of events against these contra opinions and the bigger picture, and if you still believe you are right then go forward and trade.

Britain's had their turn in the spotlight. Within the next week or two there'll be a new leader and a new fiscal plan. Who's next?

Japan's intervening again. Did you catch THE trade? You know, the 150 trade. The level that EVERYONE was watching...