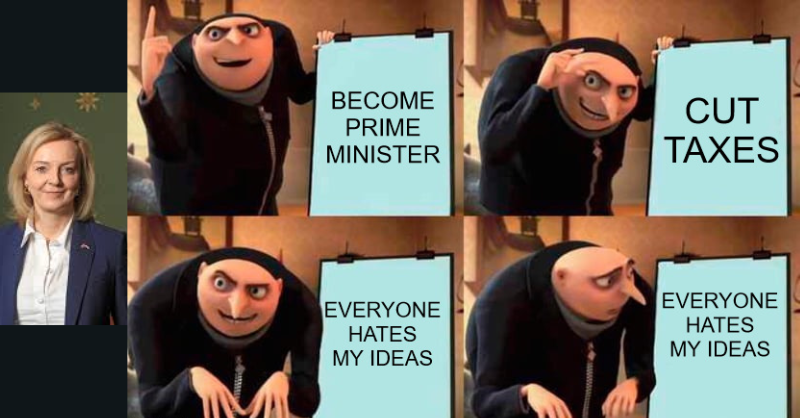 The country needs a risk-taker, a gambler. This is perversely encouraging. 👇

In case you hadn't noticed, the world's in an even greater state of flux than usual. This is no time for skirting around the edges, dipping a toe in, and playing it safe to win a popularity contest.

It's a time to be bold. Take the plunge. A rare window of opportunity for radical action.

It might not work of course. But at least Britain's giving it a proper go. Starting with those all-important banker bonuses. 👇

Typical. Start with the greedy bankers, the Tory government always helps out their own. Grrr angry face.

Bankers are a controversial example. This reform is no bad thing. Everyone loves to get all wound up about stuff they don't understand. We all do it.

Let's go back to 2014. The UK didn't want to impose this bonus cap, but the EU (and subsequently the European Court of Justice) over-ruled them.

The British Bankers' Association explained why it would be bad... 👇

“We believe that shareholders should be given powers to determine staff pay, not politicians. That’s why banks consult with investors before setting staff pay and shareholders also have the power to vote on the pay of senior bankers.”

“We believe this law runs counter to recent reforms and will make the system less robust by incentivising firms to increase fixed pay.
It also puts European banks at a disadvantage when competing with firms in other parts of the world.”

He would say that wouldn't he?! Just looking after his own interests, saying what his members want to hear and... Wait. What's this?

That's a comparison of European banks vs US banks since 2016 (not sure why, but the data didn't go back further). Look at that performance. Have a guess which is which. Maybe, just maybe, he had a point...

See, this is the thing with taxes. They're incentive management tools. Yeah, they raise money for the treasury too, but that's not their only purpose.

You can argue that it made sense to cap banker bonuses (to prevent excessive risk-taking) after the GFC, but you could also argue that the loss of confidence throughout the financial system was already doing the job.

So, why remove the cap now? What will it achieve?

It's not just some kind of trickle-down economic policy as the critics claim.

If you want to take risks, you can come to Britain and do so. Capitalism isn't a dirty word here. It also symbolises the cutting of EU red tape which has long been promised since Brexit.

Capitalism is about productive investment. Excessively low interest rates have taken a toll on the productive part, and fuelled more of the predatory behaviour instead.

Anyway... Between leaving the EU, Covid, and that scarecrow disguised as a Prime Minister, the UK has been suffering from an identity crisis for a few years.

What is Britain now?

More specifically, what is it to foreign investors? Is it somewhere to invest?
A friendly business environment with skilled workers? Is this government one they want to lend money to or partner with in long-term economic projects?

This is the Truss message 👇

"While this is just the start, our long-term plan is to simplify Britain's taxes and to make us a better place to invest and be unashamedly pro-business"

Unashamedly is clearly the latest buzz word. I think it's deliberate push back against the rise of this notion that capitalism is evil and something to be ashamed of.

And let's be clear. All of this is messaging and rhetoric. Trying to rebuild that national identity. It's PR. This isn't an effort in number-crunching and accounting.

Fake it until you make it.

It's not the best plan, but it doesn't need to be. Stories make the world go round, not numbers.

...but it is good confidence-building storytelling that spins the money around. When these stories fail to create confidence, the markets will dry up. ~Stefan Ingves

A lot of people are getting worked up over the debt problem, and whether the spending plans/debt will be sustainable.

There's nothing wrong with airing these concerns. They're perfectly correct.
But why is nobody talking about the Elephant On The Doorstep?

Two men are walking across the savannah when they see a lion running towards them. One of the men starts putting on his running shoes.

The other man says "What are you thinking, you can't outrun a lion you idiot!"

The UK's getting on their running shoes while the EU's preparing to argue about the fiscal rules (again), and Italy's about to get their latest version of a shiny new dysfunctional government.

Ironically, this response is to deal with the fact that Spain's autonomous regions have been cutting wealth taxes to compete with each other and attract capital.

Until one day they aren't.

Now this isn't to say that the Truss plans will be wildly successful and transform the economy. It's surely a fantasy to think so 👇

Although, it's surely also a fantasy to believe things will be as bad as Martin sets out.

Whatever happens, it won't be as transformative as craved nor as terrible as feared.

But it will surely be better than playing it safe and hoping for the best.

Everyone knows you never go full Volcker. The only Fed preview you need.