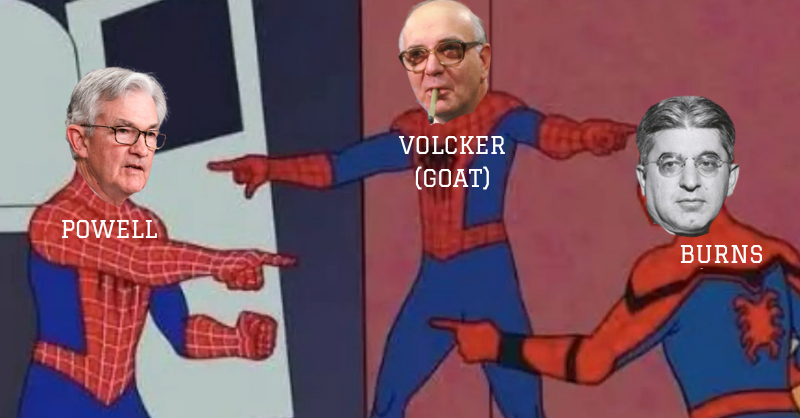 Everyone loves to moan about the Fed, smash them for their latest policy error, or even the favourite lost credibility ("but they never had any LOLZ").

It's wholesome, zero consequence fun. After all, the Fed's always wrong about something.

The whole credibility thing is irrelevant anyway. This idea that it's something they either have or don't is completely subjective. It's comparing individual ideas of what they should do against what they actually do.

Nope. The Fed has just as much credibility as any other institution... (insert your own joke here). Seriously though, they've told us what they're going to do: hike above neutral by the end of 2022. Get the Fed Funds rate to somewhere around 3.5% or 4%, then cross their fingers and hope for the best.

That's credible. It's unlikely the data turns enough in the next three or four months to make them change their mind. They'll probably do what they say.

Will it be enough to get inflation down?

Or will they lose their bottle altogether? See, this is where the credibility factor plays out. Except it's not really credibility. It's tradeoffs. How credible is the idea that they'll harm the economy, increase unemployment & wealth destruction to bring inflation down?

We can make a balanced argument that a lot of this is supply-side inflation so the central bank should hike, then pause and wait for the inevitable long and variable lags of monetary policy to finish the job...

Although... Fed researchers find that it wasn't only supply-side effects 👇

Our work shows that inflation in the U.S. would have been 6 percent instead of 9 percent at the end of 2021 without supply bottlenecks.

In any case, recent surveys (PMI's, IFO) and earnings reports are all pointing towards supply bottlenecks improving. Shipping costs are falling too 👇

Throw in the bullwhip effect (that's got retailers sitting on tens of billions in excess inventories) and the disinflationary pressures are blindingly obvious (although, in an inflationary environment, are large price cuts even necessary to shift inventory?)

Those factors alone are no guarantee of getting inflation back to 2% any time soon.

See, there are far bigger things going on than monetary policy right now. This is a fantastic summary from the Fed's favourite journo 👇

As much as the Fed can pressure the demand side of the economy, it doesn't fix any of those problems. All they can do is rebalance the economy, essentially by shrinking it.

Let's presume they manage that goal. What happens next? More investment to expand the economy again...

The entire point of the (hilariously-named) Inflation Reduction Act is to invest in the capacity of the economy.

Build up the supply side, especially energy 👇

Combine that with the Chips & Science Act ($280 billion including $52 billion for the semiconductor industry), and you get the idea...

The success of this plan will be judged many years in the future, but right now, the Fed is working on the demand side of the equation by hiking interest rates.
At some point the balance sheet reduction will ramp up too. It's been snail's pace so far...

The problem? If the Fed does too much, they risk damaging the economy that lawmakers are trying to fund & expand.

If the economy's f**ked, it doesn't matter what the tax incentives are. People stop spending and companies stop investing.

And we've been here before. Everyone's heard of Paul Volcker, but not so many are familiar with Arthur Burns, the Fed chair before him.

When it comes to actually doing something to address the core causes of price inflation, however, Powell seems uninterested. The plan right now is apparently to trust in hope that inflation can be "fixed" with some very minor tinkering with the federal funds rate and the Fed's portfolio.
And then everything will be fine.

This mirrors the thinking of Arthur Burns and his Fed during the 1970s. While inflation mounted in the late 1960s and early 1970s, Burns—who became chairman in 1970—chose to avoid doing anything that might upset the inflation-fueled economy that had prevailed during the previous decade.

The result was 12 percent inflation by the mid 1970s and an inflationary period that only came to an end after Chairman Paul Volcker finally had to take the anti-inflationary measures that Burns was unwilling to take.

With his current timid, weak, and prevaricating position on price inflation, Powell is positioning himself as the new Arthur Burns. He's only interested in doing just enough to get inflation rates down far enough to deflect political pressure from taxpayers, consumers, and others who suffer most from price inflation. It's nothing more than kicking the can down the road. That is Burns's legacy, and Powell is embracing it.

From an inflation-fighting perspective, it was a massive failure. But was Burns a victim of circumstance?

Have a watch of this 9 minute clip from the "Money For Nothing" documentary. There are so many parallels, it's uncanny 👇

"They would tell each other, we're not going to let inflation get out of hand this time. And then the unemployment rate would rise, and all that would get forgotten because the political pressures would grow."

After Burns left, he spoke freely in this lecture about how hard it was to act against the interests of the government and prevailing culture of the time.

This excellent thread sums up the key points 👇

It's not hard to imagine the Fed going down the same path again. Just 18 months ago, Brainard gave this speech: Full Employment in the New Monetary Policy Framework

The new monetary policy framework also eliminates the previous reference to a numerical estimate of the longer-run normal unemployment rate and instead defines the maximum level of employment as a broad-based and inclusive goal for which a wide range of indicators are relevant.

This speech, and plenty of the other rhetoric surrounding the FAIT framework identified and emphasised the many failings of not sticking with low rates for long enough to hit full employment.

Lifting the lives of working people is at the heart of economic policymaking. The deep and disparate damage caused by the pandemic, coming just over a decade after the financial crisis, underscores the vital importance of full employment, particularly for low- and moderate-income workers and those facing systemic challenges in the labor market.

It's fair to say that viewed solely through this lens, they've been successful. If you want a job, you can get one, and it's often better paid than the one you had before...

It's still not enough though...

A ‘Tsunami of Shutoffs’: 20 Million US Homes Are Behind on Energy Bills (BBG)

Are the Fed and the administration just going to walk away from this progress, leaving a job half done?

And is it in anybody's interest for there to be a hard landing in the US?

Especially at a time when Europe's economic engine is under extreme pressure and Chinese knees are wobbling under the huge weight of debt and a deleveraging property sector.

What if the Dems win a two-house majority (senate and congress) in the mid-terms and pass more economic support ahead of the next election cycle?

We're in a situation that has all the hallmarks of history repeating (or rhyming).
It could so easily become a new secular trend...

While I have a lot of sympathy to the view that the Fed 'won't go as hard as they should', it's hard to make the case for a return to the old regime.

Narratives are part and parcel of a dynamic market environment, fuelled by the exchange of information between traders. Some have shorter shelf lives than others...

Zoltan says that Russia and China are challenging the US hegemon. Do either of them really want the job? And will it end in war?