Let’s take a look a bird’s eye view at the week ahead.

An agreement on the amounts/proportions is close now. The final figures just need refining.

It seems the overall package will be €750bn (as originally announced). This will be distributed pretty evenly between loans and grants rather than the 500 grant / 250 loan split that was in the initial proposal.

The final figures being negotiated are between €375bn & €390bn in grants.

Upon the announcement, the focus will quickly shift to any concessions given to the frugals in exchange.

The next U.S. Stimulus bill is likely to dominate the news flow this week.

I will keep sharing articles in the twitter feed as this develops.

The stimulus bill is huge, especially against the backdrop of the spiralling Covid infection rate, stoking fears of a second lockdown.

The enhanced unemployment benefits will expire at the end of this month.

It seems certain that some form of extension will be agreed.

The main obstacle to overcome is that many were better off on unemployment benefits than when they were employed, creating a “disincentive” to return to work.

Republicans will not tolerate this again, and have touted a “return to work” bonus as a potential solution.
Mnuchin said last week;

“We anticipate that additional relief will be targeted to certain industries, smaller businesses and lower- to middle-income families that have been especially hard-hit by the pandemic,” Mnuchin said. “Our focus will be on jobs and getting all Americans back to work.”

But what about the employed?

Trump is insisting that a payroll tax cut/holiday must be included. From this piece in the Washington Post:

The payroll tax is the 7.65 percent tax that is taken out of workers’ paychecks and goes to fund the Social Security and Medicare trust funds. President Barack Obama at one point temporarily reduced the tax, but Trump wants to eliminate it entirely for some period of time.

The theory behind the tax cut is that it essentially translates to more money in every workers pay packet.

The democrats oppose this as part of the solution:

Sen. Ron Wyden of Oregon, the top Democrat on the Finance Committee, criticized Trump for focusing on payroll taxes.

“A payroll tax cut would do nothing to help the 20 million workers who have lost their jobs, and little for those working significantly reduced hours,” Wyden said. “Another payroll tax cut for employers would also shower the country’s wealthiest corporations with billions of dollars.”

As with everything “politics”, the outcome is always to be found somewhere in the middle.

Quick tangent. Every negotiation works within this framework.

Visualise a bell curve (comes in handy for so much).

Each side takes positions at the extremes of the bell curve. The compromise is almost always found around the centre of the distribution.

The reason I mention this is that political negotiations are often taken literally, when they really shouldn’t be.

It is all about priming and anchoring the other side, in order to “meet in the middle”.

Markets will want to see the consumer and smaller businesses being supported and this seems likely.

The extent of support and striking the right balance between economic support and incentivising a return to work is the key.

The clock is ticking, as this graphic demonstrates. .

As mentioned in the roundup here, the bar for vaccine news has now been raised.

Markets are becoming more selective on vaccine/treatment news, and any genuine breakthroughs will be rated on their ability to limit the spread, and the sustainable immune response. 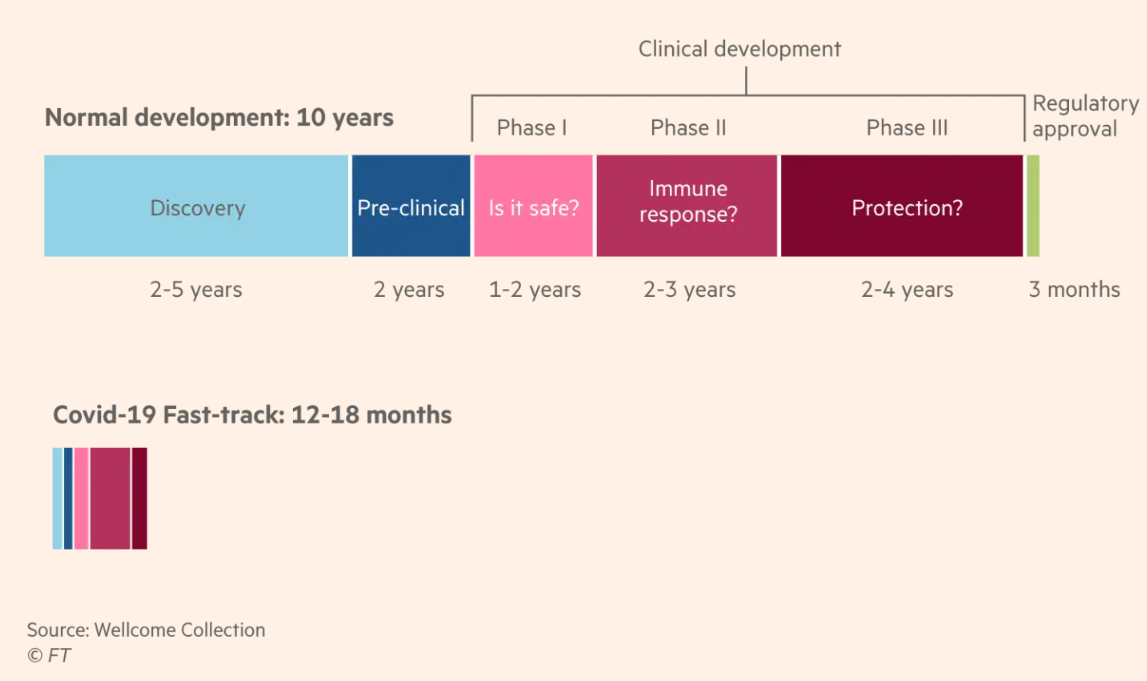 Not going to bore you with the numbers. You can use twitter to be bombarded with those from every angle.

The way I’m looking at this is that the situation is pretty terrible with increasing numbers.

There is no trade on the increasing numbers unless;

Speculating, there is a possibility that news flow could turn positive within the next 10 days.

– New infections should begin decreasing towards the end of this week and next (presuming mask-wearing and other measures are effective).
– The next stimulus bill will be approved.

We might even get an agreement on the EU talks next week, if things are not finalised today.

The devil will be in the detail (as always), so we can’t take any of these outcomes for granted.

Each of these could individually (or collectively) fail to meet up to expectations.

Lots of earnings releases in the coming week.

These 7 are touted as the ones to watch but I struggle to envisage any of the individual earnings reports moving markets significantly.

Worth keeping an eye on the larger weighted companies just in case though.