Let’s frame the outlook for the week ahead.

Risk sentiment is the primary lens that we are using to view the markets currently.

As markets are ignoring virus numbers, I’m ignoring them here too.

Equity markets are looking for excuses to stay long, but need reasons to take money off the table and pare back long exposure.

For any event to have a lasting negative impact on market sentiment it must be undeniably bad.

For an event to have a lasting positive impact, there is a low bar to clear.
“Not as bad as feared” seems to be that bar.

Any low inflation data should be viewed positively by the markets.

Low inflation = More central bank stimulus.
Any signs of inflation picking up could stoke fears of the punch bowl drying up, which would see equity markets pull back. Hard to see that happening just yet, but one to keep an eye on for the future.

The fiscal cliff is approaching in the U.S. – with the FPUC “stimulus” payments set to expire at the end of July, what will the U.S. government do?

If you want to dive deeper into U.S. unemployment insurance benefits then this article is worth a read.

This chart lays out just how much of the economy is currently underpinned by government payments. 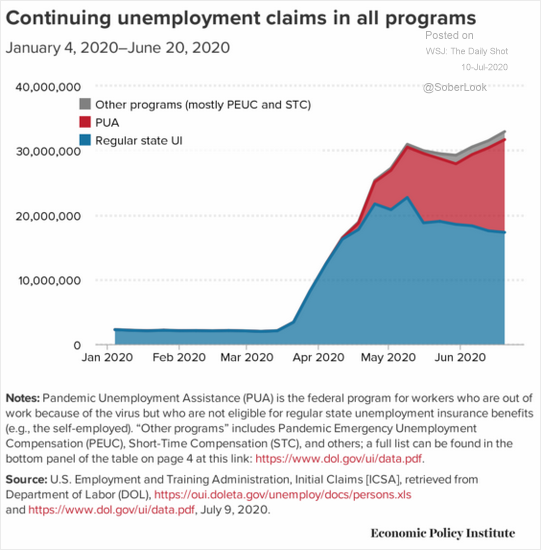 It looks unlikely that anything will be finalised this week.

Markets will be looking for signs of positive progress in order to maintain the “risk on” mood.

The $3-trillion HEROES act was approved by congress back in June, but was “Dead on Arrival” to the Republican controlled senate.

McConnell voiced concerns regarding further aid and looked to keep the bill under $1 trillion.

A compromise worth around $2-trillion seems likely. Markets are expecting this issue to be resolved positively.

It’s a tricky balancing act, as there will need to be some kind of incentive to get people back to work (as we saw recently in the UK), yet they cannot pull the rug out from underneath the economy (especially so close to the election).

Moving on to the data and scheduled events.

Earnings are back in focus. 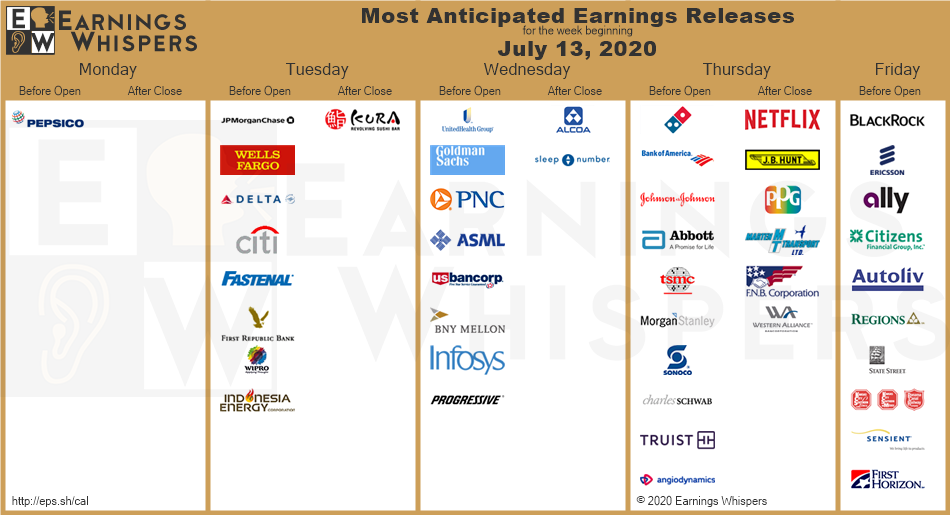 Major names reporting this week include:

Q2 is written off. Everyone knows it was terrible.

Strong focus on the banks this week and the increase of loan loss provisions, i.e. the impact on future earnings rather than current earnings.

The banking outlook may well set the scene for the broader economic picture.

Plenty of monetary policy meetings to look forward to this week.

All are expected to maintain their current policy stance, so markets will be looking for hints at any future policy changes.

I will post some previews (and summaries) for these in the discord channel.

At the back end of the week, (Friday & Saturday) the European Council meeting begins. Agreement on the recovery fund is still a long way off.

The calendar for the week ahead is pretty full, so let’s pick out some highlights. (all times BST)

China
Chinese trade data is out at 4AM on Tuesday.

Market expects continued improvement in these figures. Important to note that much of China’s recovery has been driven by domestic demand. The export figures will be closely monitored for signs that exports are increasing to other major economies (indicating improving global demand).

Thursday sees the focus switch to Chinese GDP figures and Industrial Production. Again, these will be watched as a form of leading indicator for global recovery. 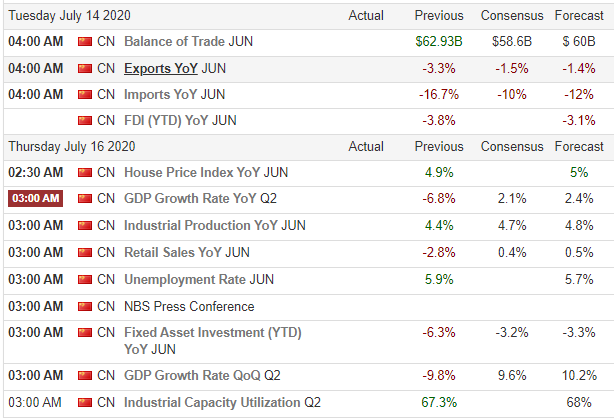 Plenty of data points from the UK this week, but none really jump out as hugely significant on an individual basis. This week is much more about building an overall picture of the UK economy.

And also watching for further clues of future tax cuts and progress towards innovative measures such as freeports https://www.ft.com/content/122cdc16-7435-4c7b-85e1-09cd10c1ab7a

BOE governor Bailey commented that he is “very worried about jobs” today, and any development towards negative rates is likely to weigh on GBP.

Leaving the ECB to one side, the ZEW economic sentiment index for Germany will be keenly watched on Tuesday. Consensus is for a drop in confidence to 60 from the previous reading of 63.4.
CPI figures will be released throughout the week, with a Eurozone “roundup” release on Friday.
Germany & Spain figures will be released on Tuesday. Italian CPI is out on Wednesday, France on Thursday. These are not expected to be big market-movers (as with most of the data currently).

The U.S. data situation is much like the U.K. Lots of data points, but no singular focal point. The obvious exception is the jobless figures on Thursday.

The JMMC of OPEC meeting takes place on Tuesday & Wednesday, amid speculation that supply cuts will be eased.

Key Point: OPEC and allies including Russia, a group known as OPEC+, are expected to ease their production cuts to 7.7 million barrels per day (bpd) after a recovery in global oil demand. OPEC+ cut output by a record 9.7 million bpd for May, June and July.